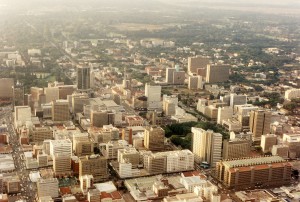 Harare from the air

Venturing out from Harare’s busy Central Business District to the surrounding countryside, the trained eye instantly recognizes the natural advantages the city enjoys. Located in a vale, fresh water from surrounding hills is drained into nearby Lakes, regulated by seasonal wetlands surrounding the city.  But (too) many eyes do not see crucial green infrastructure when looking at the “Vleis”. They see profits to be made from paving over ‘unused’ land. Harare faces a water crisis that is man-made, predictable, and avoidable, but wetland’s activists face an uphill battle.

Harare is situated in the Upper Manyame Catchment Basin which feeds into Lakes Chivero and Manyame, the main water supplies downstream of the City. The vleis, dambos, marshes and open green spaces within the city are the primary source of water feeding into streams and rivers flowing into the Manyame River. Seasonally innundated, the wetlands play a crucial role in regulating water levels and sediment retention. The value of the exceptionally bio-diverse open grassland wetlands was recognized more than a century ago, their protections enshrined in laws and indeed they remained almost untouched until the turn of the century. 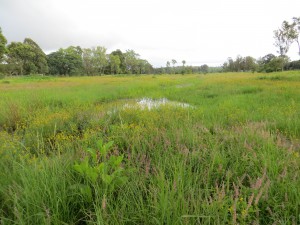 Since then, the population of Greater Harare burgeoned to around 7 million people, mostly due to rural – urban migration. Resulting pressures from development, informal agriculture and pollution have led to the rapid loss of these important wetlands, which is having very serious implications for the biodiversity of the wetlands and the ecosystem services they provide, including the pivotal service of fresh water provision for the citizens of Greater Harare.

Protecting wetlands in Harare remains a contentious issue as these areas are sought after by developers and cultivators, being the only open spaces left in the city. As our wetlands become more degraded water insecurity increases putting sustainable livelihoods at risk. Budirio 3 Vlei is a degraded gazetted wetland. It has to be restored it along with all of Harare’s Wetlands to ensure a sustainable future. The World Wetlands Days offer a great opportunity for the local wetlands community to raise awareness for their value.

Monovale Vlei in the Rainy Season
by Kenneth Irvine, wetlandsforum.net

Monovale Vley in the Dry season
by Lucy Tingay, herzimbabwe.co.zw